Step Out of Your Comfort Zone

I used to be the antithesis of an endurance athlete. I loved lifting weights, but I hated anything having to do with cardio. At one point I sustained a shoulder injury that kept me out of the weight room. A friend asked if I’d like to run with him.  He’d asked me dozens of times before, but I had no interest.  This time, he knew I had no choice. We started with three miles, and over the course of the next several weeks we ran in the 3-5 mile range each day.  One day we tried a different route, and we ended up going 7 miles. At that point, Carl told me, “That’s more than 50% of a half-marathon.  A half-marathon is completely in reach.  But more importantly, if you can do a half-marathon, you can do a marathon.  Let’s run a marathon together!” 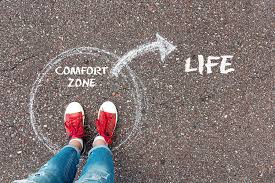 Fear is a natural, human instinct that was instilled in us for a very good reason.  Simply stated, it keeps us from doing stupid things. However, not all fear is real, or healthy.  In fact, there’s a saying that fear stands for False Expectations Appearing Real.  Many times, these fears are not grounded in reality, and they can become unhealthy, consuming, exhausting emotions that cripple you and keep you from living the life you were meant to live. Fear is the number one reason people don’t pursue their goals, their passions, and their callings in life.

While there are many types of fear, the following categories of fear are common amongst athletes:

Another Perspective on Fear

“’Lord, if it’s you,’ Peter replied, ‘tell me to come to you on the water.’  ‘Come,’ Jesus said.  Then Peter got down out of the boat, walked on the water and came toward Jesus. But when he saw the wind, he was afraid and, beginning to sink, cried out, ‘Lord, save me!’” ~Matthew 14:22-23. Peter was in the safety of the boat when Jesus walked on water past the boat.  Initially, with the encouragement of Jesus, Peter had the courage to step out of his comfort zone and walk on water.  Consistent with human nature, he then took his eyes off Jesus and became afraid.

God has a lot to say about fear.  In fact, the Bible is filled with phrases similar to “do not be afraid,” and the most common phrase after those words is, “for I am with you.”  Satan may be in the business of instilling fear into our mind, but the word of God repeatedly tells us not to be afraid that you have what it takes, not to be afraid of failure, not to be afraid of what others think, and, in general, not to be afraid because you are His child.  “Have I not commanded you? Be strong and courageous. Do not be frightened, and do not be dismayed, for the Lord your God is with you wherever you go.” ~Joshua 1:9.

Satan knows that fear prevents people from pursuing their goals, their passions, and their callings.  If Satan can instill enough fear to prevent us from taking action, he can keep us from doing God’s work.  Unfortunately, he’s really, really good at it. Jesus said, “The thief comes only to steal and kill and destroy; I have come that they may have life and have it to the full.” ~John 10:10. Satan’s goal is to destroy our lives, and lies are his number weapon, including the lie of fear.

Get to the Starting Line

After laughing at Carl over his ridiculous idea of running a marathon, I ended up thinking about it.  While I was busy thinking and evaluating, he and I continued to run, and by the time our runs exceeded 10 miles, I realized that training for a marathon was in the realm of possibility.  Over time, I agreed, and we signed up for the 1999 Buffalo Marathon.  Despite gaining confidence along the way, I remained fearful.  Would I fail?  Do I have what it takes to run a marathon?  Will others laugh at me if I fail?  Will others laugh at me if I’m slow?  All these fears kept running through my mind.

It was an unseasonably warm day in Buffalo, NY, with all the elements of spring – sunshine, flowers blooming, and birds singing.  It also meant temperatures that were much warmer than what I’d been training in.

Once the race began, the first 18 miles went as planned, but they say the marathon is a tale of two races: 18 miles and then 8.2 miles. The challenge this day would be the last 8.2 miles.  Miles 19, 20, and 21 went well.  Mile 22 is when trouble reared its ugly head.  At one point on mile 22, I started feeling extremely hot but surprisingly dry.  Then I realized I was no longer sweating and was in trouble.  At that point in the race we were downwind from the Buffalo Zoo, and the smell of animals put me over the top.  I stopped and gagged for a while.  Then I found some fresh air and shade, and I grabbed some water and ice chips before finishing the race.

Not a single person questioned my time, my ability, or whether I was a "real runner."  The fact that I gave it my best effort was enough. The fact that I crossed the finish line was a bonus.

Think about your fears.  What are you most afraid of?  Is that fear real, and if so, how likely is it to materialize?  Why are you afraid of it?  Is your fear rooted in what others may think of you?  Is that fear something that should control your emotions?

Then, put your trust in the following truths:

Welcome to the new you.  Enjoy the journey...
Check out In Our Weakness We Are Strong on Amazon at  https://amz.run/3fv1
Learn more about Dave VanEpps or request a speaking engagement at www.davevanepps.com
at November 14, 2020 No comments: